June 05, 2022
This is my sixth attempt at writing about my life as a teenager and beyond. The life I led back then was peculiarly slippery. There were always plenty of opportunities for self improvement  where pursuing the offers took that long that the improvement seemed like a backward step when done. I would be told that I was 'Too old' to be improved by what I pursued-it was meant to help younger people and the age appropriate improvement I should have chased was now unavailable. What I remember most from those times is how often what I was told to believe proved to be more opaque about peoples actions and intent than I could read as being at the time.  My family disliked change and slowed down every natural change that growing up involves by mis-describing life for the young and making it a half life. My mission as a teenager was to try and find out who I actually was, as opposed to accepting who other people said I was. Nearly every time I guessed rightly who I was then other people,
Post a Comment
Read more

Chapter 23 - The Alien And The Friend For Life

June 24, 2020
The best thing that happened after the four including Sister Sue left for Cornwall has already appeared in this memoir, in the last three paragraphs of the chapter titled ' The Alien And The Impossibility Of Homosexuality '. There I describe how I came to receive counselling for the first time. Though in those paragraphs it is set out without the backdrop of me having read the Dorothy Rowe book, having had the argument after the under-prepared party, but including after Mother dropped the bombshell about my mental health and why I was sent to a mysterious boarding school where part of the mystery up to that point had been about why I was sent there being withheld from me in such a way as stopped me being able to ask why. I was at the parental house a short time after Shaun and friends had left so disagreeably, and blown a the biggest hole in my life that I could imagine with their departure. I was looking for the sellotape in a cupboard with just Mother about. She was sure
Post a Comment
Read more

Chapter 22 - The Alien And The End Of A Friendship

June 22, 2020
Shane* had is own ideas about what entertained him away from the flat. He kept a motorbike at his parents house, had a full driving license whereas I had a provisional license just for learning to drive with and no means of private transport. He had other own private places as well. They were places that I knew about but knew nothing much about, all of which was part of a regular spontaneity that lay somewhere between his personal privacy and the friendship between us. His ideas of what entertained him intersected most with mine when we were both centred around entertaining in the flat and around shared tastes in music. My favourite times in the flat were the simple shared meals where we took turns in cooking for each other. Sometimes Mother gave us fruit and veg that were surplus from her allotment. There the good in her gifts lay in how we shared them out inclusively. Shane's favourite dishes to make were spaghetti bolognese and spaghetti carbonara, meals that were interestin
Post a Comment
Read more

Chapter 21 - The Alien And The Ignoble Experiment 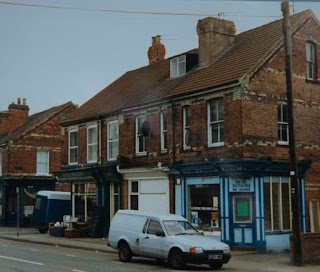 The three first floor windows to the left of the block were where 'my new flat' was. The junk shop with blue van outside it below  did a brisk trade in second hand fridges  and cookers  bought with Dept of Social Security grants.  The projects some people assume they can make work whilst being totally blind to mental health issues and unaware of sexual diversity will never cease to be amazing. The half a house that Mother found through which to return me to return me to the family fold on her terms was a wonderful opportunity for a long term tenancy for somebody. I was never going to be that somebody. They would have to have been be far more prepared than I ever could have been to draw the potential out of the place. However much I tried to make living in that flat work for me and my friends my family were too close by for me to ever be genuinely at ease. I was never meant to know that my hidden discomfort was part of the point of the tenancy. Mother had seen I
Post a Comment
Read more

Chapter 20 - The Alien Gets Nearer Seeing Through The Glass Ceiling

June 02, 2020
From filling in the application form through to the interview, through to when the offer of a place on the work scheme was made to me I could not process what I was being offered. I went through it blind. What I was most blind towards was the aptitude test that Bob Rainsforth insist I go through after the interview but before the offer of the job was made to me. Aptitude for what? Gullibility? I had surely passed that test by filling in the application form in a way that was both readable and half made sense to him before I was presented with the test. Not that I knew what made sense to employers. My best reason for applying for any every job was to remain on benefits. The more jobs I applied for and never got, the more I proved I still wanted work and kept my benefits for offering my proof. Whatever job I was pushed to apply for the risk involved in being accepted to do it meant less to me than the safety of social security. I knew I meant nothing to the employer as I filled thei
Post a Comment
Read more
More posts

Bearz
I am a sort of person. I sometimes make things.